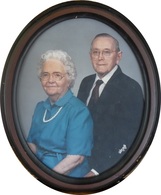 Founders of the Hughes County Historical Society and Museum
Herbert and Anna Friend.
Without the vision and hard work of Mr. and Mrs. Friend, the museum would never have become a reality. They are now gone, but what they accomplished will live on for generations to come.

The Hughes County Historical Society  is an Oklahoma Domestic Not For-Profit Corporation filed on August 7, 1975. The Registered Agent on file for this company is Harold Davis. The company has 3 principals on record. The principals are Amanda Fuller, Edgar Hawthorne, and Herbert Friend. Only Harold Davis of this group of founders survives, living in Holdenville.

The Hughes County Historical Society and Museum are located in the historic Scott Hotel in downtown Holdenville, Hughes County, Oklahoma. Built in 1901 as the Scott Hotel, the old building has served many purposes over the last 113+ years. Originally a three story structure, a fire consumed the third floor of the building. It has also seen use as a grocery store, and a hardware store, before becoming the home of the Hughes County Historical Society. Thanks to a dedicated core of volunteers, we continue to record the history of the local communities and construct displays of items and photos of historic interest for the generations to come.